Recently, several works proposed the convolution of a neural network with a Gaussian as a smoothed classifier for provably robust classification. We show that adversarially training this smoothed classifier significantly increases its provable robustness through extensive experiments, achieving state-of-the-art ℓ2​ provable robustness on CIFAR10 and Imagenet, as shown in the tables below.

Update 09/10/2019: By combining pre-training and semi-supervision with SmoothAdv, we obtain significant improvement over SmoothAdv alone.

It is now well-known that deep neural networks suffer from the brittleness problem: A small change in an input image imperceptible to humans can cause dramatic change in a neural network’s classification of the image. Such a perturbed input is known as an adversarial example and is by now immortalized in the famous picture below from Goodfellow et al.

Given the importance of the problem, many researchers have formulated security models of adversarial attacks, along with ways to defend against adversaries in such models. In the most popular security model in the academic circle today, the adversary is allowed to perturb an input by a small noise bounded in ℓp​-norm, in order to cause the network to misclassify it. Thus, given a loss function L, a norm bound ϵ, an input x, its label y, and a neural network F, the adversary tries to find an input x^, within ℓp​-distance ϵ of x, that maximizes the loss L(F(x),y), i.e. it solves the following optimization problem

If F has trainable parameters θ, then the defense needs to find the parameters that minimizes L(F(x^),y), for (x,y) sampled from the data distribution D, i.e. it solves the following minimax problem

Empirically, during an attack, the adversarial input x^ can be obtained approximately by solving the max problem using gradient descent, making sure to project back to the ϵ-ball after each step. This is known as the PGD attack (Kurakin et al., Madry et al.), short for “project gradient descent.” During training by the defense, for every sample (x,y)∼D, this estimate of x^ can be plugged into the min problem for gradient descent of θ. This is known as Adversarial Training, or PGD training specifically when PGD is used for finding x^.

Currently, the standard benchmark for measuring the strength of a model’s adversarial defense is the model’s (empirical) robust accuracy on various standard datasets like CIFAR-10 and Imagenet. This accuracy is calculated by attacking the model with a strong empirical attack (like PGD) for every sample of the test set. The percentage of the test set that the model is still able to correctly classify is the empirical robust accuracy.

For example, consider an adversary allowed to perturb an input by ϵ=2558​ in ℓ∞​ norm. On an image, this means that the adversary can change the color of each pixel by at most 8 units (out of 255 total) in each color channel — a rather imperceptible perturbation. Currently, the state-of-the-art empirical robust accuracy against such an adversary on CIFAR-10 hovers around 55% (Zhang et al. 2019, Hendrycks et al. 2019), meaning that the best classifier can only withstand a strong attack on about 55% of the samples in CIFAR-10. Contrast this with the state-of-the-art nonrobust accuracy on CIFAR-10 of >95%. Thus it’s clear that adversarial robustness research still has a long way to go.

where δ∼N(0,σ2I), and the variance σ2 is a hyperparameter of the smoothed classifier g (it can be thought to control a robustness/accuracy tradeoff). In Cohen et al., f is a neural network.

To estimate g(x), one simply has to

The robustness guarantee presented by Cohen et al. is as follows: suppose that when the base classifier f classifies N(x,σ2I), the (most popular) class cA​ is returned with probability pA​=Pδ​(f(x+δ)=cA​), and the runner-up class cB​ is returned with probability pB​=maxc​=cA​​Pδ​(f(x+δ)=c). We estimate pA​ and pB​ using Monte Carlo sampling and confidence intervals1. Then the smoothed classifier g is robust around x within the radius

where Φ−1 is the inverse of the standard Gaussian CDF. Thus, the bigger pA​ is and the smaller pB​ is, the more provably robust g is.

Cohen et al. simply trained the base classifier f under Gaussian noise data augmentation with cross entropy loss, i.e. for each data point (x,y), sample δ∼N(0,σ2I) and train f on the example (x+δ,y). With this simple training regime applied to a Resnet-110 base classifier, they were able to obtain significant certified robustness on CIFAR-10 and Imagenet, as shown in our tables.

The following figures modified from Cohen et al. illustrate randomized smoothing. The base classifier f partitions the input space into different regions with different classifications, colored differently in the left figure. The regions’ Gaussian measures (under the Gaussian N(x,σ2I) whose level curves are shown as dashed lines) are shown as a histogram on the right. The class cA​ corresponding to the blue region is the output of the smoothed classifier g(x); the class cB​ corresponding to the cyan region is the runner-up class. If pA​ is large enough and pB​ is small enough, then we can prove that g(x′)=cA​ for all ∥x′−x∥2​≤ϵ, i.e. g is robust at x for ℓ2​ radius ϵ. 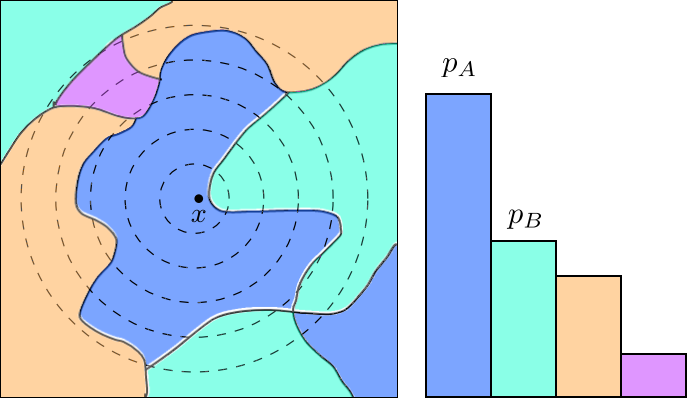 Intuitively, adversarial training attempts to make a classifier locally flat around input sampled from a data distribution. Thus it would seem that adversarial training should make it easier to certify the lack of adversarial examples, despite having no provable guarantees itself. Yet historically, it has been difficult to execute this idea (Salman et al. 2019, and folklore), with the closest being Xiao et al.

It is hence by no means a foregone conclusion that adversarial training should improve certified accuracy of randomized smoothing. A priori there could also be many ways these two techniques can be combined, and it is not clear which one would work best:

It turns out that certified accuracies of these methods follow the order (1) < (2) < (3) < (4), with (4) achieving the highest certified accuracies (see our paper). Indeed, in hindsight, if g is the classifer doing the prediction, then we should be adversarially training g, and not f. In the rest of the blog post, we lay out the details of (4).

We will refer to the above as the SmoothAdv objective. The SmoothAdv objective is highly non-convex, so as is common in the literature, we will optimize it via projected gradient descent (PGD), and variants thereof. It is hard to find exact gradients for SmoothAdv, so in practice we must use some estimator based on random Gaussian samples.

Estimating the Gradient of SmoothAdv

However, it is not clear how to evaluate the expectation inside the log exactly, as it takes the form of a complicated high dimensional integral. Therefore, we will use Monte Carlo approximations. We sample i.i.d. Gaussians δ1​,…,δm​∼N(0,σ2I), and use the plug-in estimator for the expectation:

It is not hard to see that if F is smooth, this estimator will converge to ∇x′​J(x′) as we take more samples.

SmoothAdv is not the Naive Objective

where the log and E have been swapped compared to SmoothAdv, as suggested in section G.3 of Cohen et al. This objective, which we shall call naive, is the one that corresponds to finding an adversarial example of F that is robust to Gaussian noise. In contrast, SmoothAdv directly corresponds to finding an adversarial example of G. From this point of view, SmoothAdv is the right optimization problem that should be used to find adversarial examples of G. This distinction turns out to be crucial in practice: empirically, Cohen et al found attacks based on the naive objective not to be effective. In our paper, we perform SmoothAdv-attack on Cohen et al.’s smoothed model and find, indeed, that it works better than the Naive objective, and it performs better with more Gaussian noise samples used to estimate its gradient.

We now wish to use our new SmoothAdv attack to boost the adversarial robustness of smoothed classifiers. As described in the beginning of this blog post, in (ordinary) adversarial training, given a current set of model parameters θt​ and a labeled data point (xt​,yt​), one finds an adversarial perturbation x^t​ of xt​ for the current model, and then takes a gradient step for the model parameters θt​, evaluated at the point (x^t​,yt​). Intuitively, this encourages the network to learn to minimize the worst-case loss over a neighborhood around the input.

Hendrycks et al. showed that pre-training on Imagenet can improve empirical adversarial robustness on CIFAR-10 and CIFAR-100. Similarly, Carmon et al. showed that augmenting supervised adversarial training with unsupervised training on a carefully selected unlabeled dataset confers significant robustness improvement. We adopt these ideas for randomized smoothing and confirm that these techniques are highly beneficial for certified robustness as well, especially for smaller radii (though unfortunately their combination did not induce combined improvement). See the tables below.

Over the course of the blog post, we have introduced several hyperparameters, such as 1) ϵ, the radius of perturbation used for adversarial training, 2) m, the number of Gaussian noise samples, 3) σ, the standard deviation of the Gaussian noise. We also did not mention other hyperparameters like T, the number of iterations used for PGD iterations, or the usage of DDN, an alternative attack to PGD that has been shown to be effective for ℓ2​-perturbations (Rony et al.). In our paper we do extensive analysis of the effects of these hyperparameters, to which we refer interested readers.

In this blog post, we reviewed adversarial training and randomized smoothing, a recently proposed provable defense. By adversarially training the smoothed classifier — and carefully getting all the details right — we obtained the state-of-the-art ℓ2​ provable robustness on CIFAR-10 and Imagenet, demonstrating significant improvement over randomized smoothing alone.